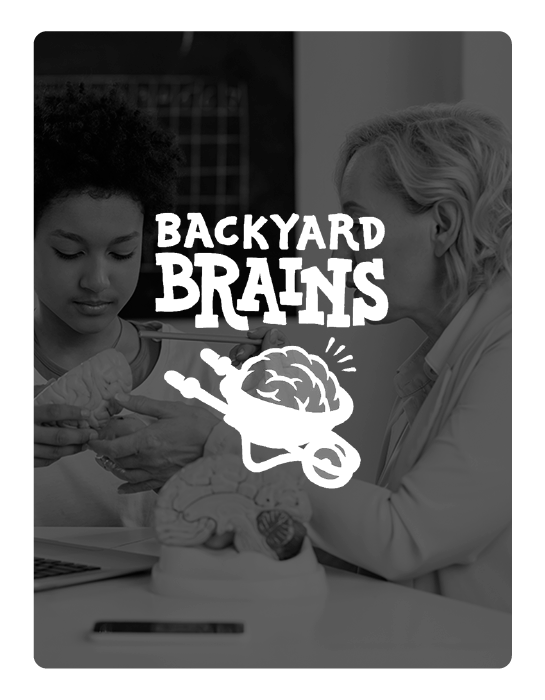 BYB’s education technology allows advanced neuroscience research to be used in 6-12th grade programs through a suite of open-source tools, appropriate for amateurs and classrooms, that work exactly like research-grade equipment.

While a reported 20 percent of the world has a neurological disorder with no cure, neuroscience was not being taught in K-12 education – possibly stifling future interest and innovation in the area. As neuroscience Ph.D. students at the University of Michigan, co-founders Tim Marzullo and Greg Gage attempted to change that through an experiment, discussing neuroscience with middle school children. They quickly realized there was no way to ignite an understanding for the kids without demonstrating compelling experiments like the ones from their research lab. So, they founded Backyard Brains (BYB) in 2009 – using off-the-shelf electronics and readily available products to create kits that would let kids learn about neuroscience at an earlier age. Students could now do similar experiments using simple gear and their mobile devices.

BYB’s education technology allows advanced neuroscience research to be used in 6-12th grade programs through a suite of open-source tools, appropriate for amateurs and classrooms, that work exactly like research-grade equipment. The company focuses on hands-on experiments and electrophysiology. Over the past 10 years, BYB has grown a large base of amateur DIY neuroscientists that are actively engaging in classroom research and publishing their work in peer-reviewed journals, and its pioneering work has been recognized with awards from the National Institutes of Health (NIH) and the Society for Neuroscience.

The NIH Small Business Innovation Research Program (SBIR) and other programs offered through the Institutes provided the company with funding and guidance to successfully commercialize its product. Product sales were slow until SBIR grant funding enabled BYB to grow from a small outreach project to a successful neuroscience education technology company. With over 10,000 schools and colleges now using its gear, BYB exemplifies the goal of the SBIR program. BYB is providing a pipeline of students into neuroscience research – and, has created a new market in the process!

In 2011, BYB was awarded a National Institute of Mental Health (NIMH) SBIR grant that allowed the company to begin scaling its research and product development efforts. Based on the technology developed, BYB was asked to present on the TED Stage in 2012. Its second TED talk launched the company’s Human-Human Interface, funded through SBIR. Human-Human Interface is a sensational electrophysiology demonstration and experiment that has inspired millions of people to learn more about the electricity in our brains and nervous systems. As teachers watched the company’s talks, they began to see what was possible in the classroom – and sales grew. SBIR funding allowed the company to hire quality people and develop processes to efficiently and affordably develop and commercialize new products.

Today, BYB has grown to $1 million in annual sales over the past three years, and its popular videos have reached over 35 million viewers. Additionally, the company has produced and sold over 20,000 kits and created over 50 free experiments – with over 6 million unique visitors – enabling students and educators to perform real, hands-on neuroscience in the classroom. BYB is not only profitable – it’s getting neuroscience into the hands of tomorrow’s researchers and innovators!